Driverless Cars for People with Disabilities

Home » Driverless Cars for People with Disabilities
Previous Next

Driverless Cars for People with Disabilities

Products designed for disabled people can be good for everyone 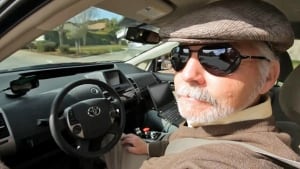 It’s not every day that Google comes calling. So when Steve Mahan got a chance to test drive the car of the not-so-distant future, the California man couldn’t get behind the wheel fast enough.

But he didn’t have to steer it or hit the brakes. The Google Car drives itself, and Mahan, who was actually more of a test rider, became an instant convert.

“I love technology. I see all those new things as open doors or opportunity and ability that I didn’t need before but I desperately need now.”

That’s because Mahan is blind.

And that disability — along with the disabilities of millions of others — are transforming the marketplace as big-name companies look for ways to appeal to a vast potential customer base eager for products and services that work for them.

The population of people with disabilities is the fastest-growing minority in the world when you include aging baby boomers. Globally, it’s about 1.3 billion people, a market roughly the size of China. Add their friends and family to the mix and the number doubles, to more than half the world’s population.