6 reasons why hiring people with disabilities is good for business

6 reasons why hiring people with disabilities is good for business

Original article from the Chronicle Herald 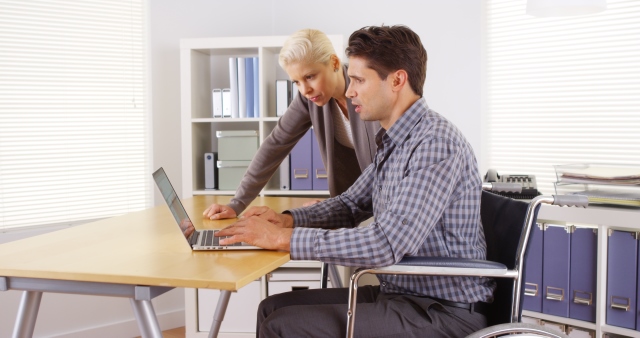 According to Statistics Canada, 54 per cent are unemployed or not in the work force, but some believe the number is actually around 70 per cent after factoring in people who have given up looking. (The unemployment rate for the general population was 7.3 per cent on May 11.)

Toronto businessman Mark Wafer writes: “I am deaf, I have about 20 per cent hearing and have since birth. I could not keep a job as a young man but became a successful business owner. I began hiring people with disabilities in my first Tim Hortons in 1995.”

To date he has hired 82 people with disabilities, including 33 currently in his workforce of 210, spread over six locations.

“Why did I do this?” Wafer continued. “Simply because I saw a business benefit as time went on. Of course, it was the right thing to do, but that isn’t reason enough for business owners to hire PWDs (people with disabilities.)”

So thank you, Mark Wafer, for reminding me that hiring the disabled is just good business.

Here are six reasons why:

More of the disabled have a trade certificate, 11 per cent, than the regular population, nine per cent. As well, 17 per cent of adults with disabilities have a college degree or diploma, exactly the same as the general population.

Many years ago, I flew with Rick Hansen, the renowned wheelchair athlete, to an event. Before we left, I happened to see him get out of his van by himself, collect his briefcase and a large suitcase. It was an impressive exercise using the minimum of effort to do something that looked very difficult. For example, he had a cable attached to the van’s hatchback door so he could pull it closed, because when open it was well out of his reach.

“A person in a wheelchair has to be innovative just to get through the day,” Wafer pointed out. “Imagine how that mindset helps a pod or team at a workplace.”

Contrary to popular belief, disabled people require very little accommodation in the work place. According to the Conference Board of Canada, only 20 per cent require any accommodation at all on the job and the cost for doing so in 65 per cent of cases was between $1 and $500.

My daughter Quinn, for example, worked in a testing lab one summer as a technician. The government-supported Ontario Interpreting Service provided an interpreter for two hours on her first day, while she learned about the complex tasks she had to perform. Thereafter, she managed fine without one.

The disabled are very motivated employees. Research studies on this are sparse but there is plenty of anecdotal evidence.

Wafer maintains that “employees who have a disability work 97 per cent safer, have attendance records 86 per cent greater, stay on the job up to five times longer (and) increase morale to the point that non-disabled staff stay longer (huge win for me).”

There are clear indicators that there’s going to be a shortage of labour in Canada as baby boomers age.

Representing 12.5 per cent of the population, the disabled are ready, willing and able to fill the gap.

When the disabled have meaningful employment (or any employment, for that matter) the burden on the taxpayer is lessened. Looked at another way, every dollar not needed for social assistance is a dollar available for something else.

As Wafer pointed out, there is tremendous opportunity for both employers and the disabled. Together with Joe Dale of Rotary

International, he created a program called Rotary at Work to convince employers that the disabled can become an important part of the workforce

“The result since 2009 is huge (with) 137 people with a disability hired in meaningful positions. No charity. That means competitive salaries. This includes every department from managers to front-line staff, production and logistics.”

An initiative like Rotary at Work, writ large, could make a significant social and financial impact on Canadian society.